Sterling came undone on Friday with the GBPUSD rate dropping to its lowest levels since September 2020.

As mentioned on Friday, retail sales fell for the second consecutive month, consumer confidence is near an all-time low and concerns that the UK may look to tear up its agreement over Northern Ireland; all weighed on sterling.

Added to this BOE Governor Bailey once again reiterated his stance on managing high inflation with slower economic growth; leading to market expectations of rate rises by the BoE to dampen.

For now, markets appear to be negative on sterling on the basis of (i) front loaded interest rate hikes seeming unlikely, a stark contrast to stances amongst other central banks, (ii) fears over economic growth with consumers weary over the rising cost of living and (iii) re-emergence of negative Brexit related headlines.

Very little news this week from the UK and the BoE members are on a blackout period ahead of the 5th May meeting.

There appears to be rising dissent amongst the ECB over monetary policy with Christine Lagarde reportedly asking her fellow members to refrain from airing personal views regarding monetary policy. As mentioned last week we had two members comment that a chance of a July rate rise could be on the cards. Markets are now pricing in a 20% chance of a rate rise in July.

Macron won in the French elections but given that the market anticipated this last week there has been no major move off the back of this but nonetheless takes one form of risk posed to the Euro out of the equation.

Focus this week will be on speeches by various members of the ECB with markets looking to take cues of further mentioning of a potential rate rise in July. Inflation and growth figures are due for release later in the week.

The dollar soared on demand as yields on government bonds continued to rise on the back of a hawkish Federal Reserve.

Fed Chair Powell suggested last week that a 50bps rate hike is on the table for May causing markets to price in a 97% probability as well. With tightening labour market and rising wages, the possibility of two additional hikes of 50bps over subsequent months is also rising.

The dollar is still at its strongest level versus the pound since September 2020 and versus the euro the strongest since March 2020.

Fed speakers are now in a blackout period so focus will turn to domestic data with the release of durable goods on Tuesday, first quarter GDP figures on Thursday and Friday’s inflation figures.

Canada’s higher than expected inflation figures last week caused BoC Governor Macklem to not rule out a 75bps hike by the BoC in its next meeting. He will be in parliamentary committee this afternoon so markets will see how he reacts to any questioning of hiking rates faster than the expected 50bps.

Inflation figures from Australia will be out on Wednesday.

Today's Interbank Rates at 09:10am against sterling movement vs Friday. 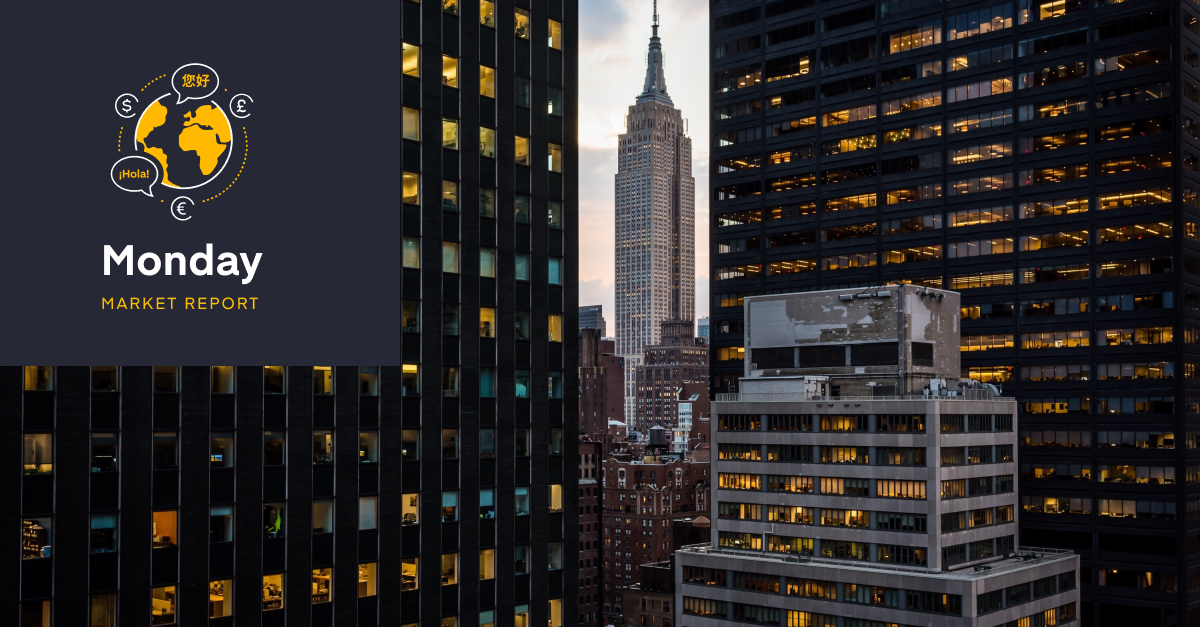